If so, then you just might be a late bloomer. Congratulations!

You are in good company. Other late bloomers include artist Paul Cezanne, poet Robert Frost, scientist Charles Darwin, as well as tons of other great literary, scientific, and artistic masters, whose finest works came later in life.

We late bloomers like to march to the beat of our own drummer. We follow our own cadence and create our own tempo, regardless of the rhythm around us.

David Galenson, Professor of Economics at the University of Chicago, has written about late bloomers and has this to say: “Late bloomers muddle ahead, experimenting and failing and trudging forward for decades before they’re a success, or even noticed at all.”

Social commentator Malcom Gladwell wrote about the old masters vs. young prodigies debate in his October 20, 2008 New Yorker essay “Late Bloomers.” He notes that “Doing something truly creative, we’re inclined to think, requires the freshness and exuberance and energy of youth.”

But the truth is that a person’s talent, gifts, or just simple self-awareness can bloom late. It did for me.

So if you’re not where you think you should be in life, if you haven’t accomplished all that you set out to, or if you think you haven’t realized your potential yet, take heart. There’s still time to be who you really are.

Success happens at all stages of life, and sometimes having to wait, or do the necessary work for it, makes the success that much sweeter. Whether it’s learning to cook at age 49 like Julia Child, or getting your first novel published at 59 like Pulitzer Prize winning writer Frank McCourt, or getting discovered at age 48, like singing sensation Susan Boyle.

Or getting married for the first time at 56 and 50, like Robby and me.

One of my favorite late blooming stories is Marc Maron, a stand-up comedian who struggled for years with drugs and alcohol, while struggling to get traction in the comedy world. Finally, at 50-years-old, he found his footing (and eventual success) with the creation of “WTF,” his original podcast. 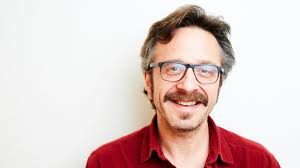 “You know, when I look back on all the things I did. I don’t have any regrets. But I also know that maybe I wasn’t ready for whatever was going on. There was some stroke of cosmic timing in that — out of desperation, I turned to podcasting. Things aligned, so now I can be the comic I want to be and sell some tickets in some markets, and now I got a TV show on the air. And the one thing I can say, whether I changed myself or whether it was a series of events, is that, because I was humbled, and because I let go of a lot of expectation, I was truly ready to show up for everything that’s happened.”

Whether it’s cosmic timing, the planets aligning, or just having patience and perseverance, it’s never too late to bloom.