We lasted four years together, which is shocking since I didn’t think we’d make it past his 2017 inauguration.

I thought we were over so many times; I thought he was out the door; I thought we were splitsville, but after every fuck up, controversy, or scandal, he managed to hang in there, for better or for worse. Although married three times, breaking up is really not his style. Nor is it his style to apologize or take responsibility. No, he just wanted to watch TV, tweet, and put as little work into the relationship as possible.

And I couldn’t do a thing about it. I had no choice. It was an arranged marriage of sorts, and I was stuck with him. I knew he was deeply flawed, wasn’t a healthy choice, and he definitely wasn’t my type, but I went into it anyway, plugging my nose and hoping for the best. I never stopped hoping he’d change. Or evolve. Or behave. Or just shut up and be nice.

I thought he could be fixed! Silly me!

From lying about his crowd size, to defending Russia, to coddling white supremacists, to threatening Ukraine, to his catastrophic response to the coronavirus pandemic, to trying to overturn an election and inciting a violent insurrection, he could never be the man I needed him to be.

I mean, how can you be in a relationship with someone who lied to you over 20,000 times??

He was never relationship material, and proved it every day. He pissed me off on Twitter, disgusted me at a press conferences, enraged me with his rallies. During our time together, he made poor choices, and constantly put his foot in his mouth. After  accomplishing things, he would self-sabotage spectacularly. He couldn’t help himself; he was his own worst enemy. For a guy who wanted love and loyalty so badly, he did everything he could to undermine it. SAD! as he’d tweet.

Normally, you’d want to give someone like this a big hug because you know how hurt and wounded they are, but it’s Trump, and it’s COVID, so please don’t.

As much of a disappointment as he was though, I must’ve cared or else I wouldn’t have written two blog posts about him.

The first one was called “The Trump Effect and How It’s Affecting Me,” written on October 10th, 2016. It was a month before the election, but it wasn’t about Donald Trump the candidate, it was about his Donald Trump the bully. 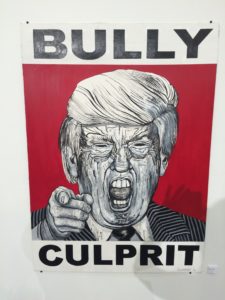 Why did this matter to me and why did I blog about it? Because I was once the victim of bullying myself. Not in a schoolyard when I was a kid, but as an adult, not too long ago. I was harassed, cyber-bullied, and threatened by some ex-friends. Years later, when Trump started his campaign, those old wounds were triggered.

“Trump’s habit of demonizing people because of their race, religion, gender, and appearance, is hitting a very sensitive spot for me. Whenever he humiliates and shames, it’s like he’s doing it to me personally. Whenever he hurls insults or demeans someone, he does it to me too.”

In light of the attack on the Capitol building on January 6th, 2021, what I wrote about bullies seems almost prescient:

“Worst of all, Trump is inciting a mindset in his supporters that feels like a collective threat to my soul. They remind me of an angry mob with pitchforks and torches, but instead of marauding through towns, they hide behind computers destroying you with their words.”

The second blog post I wrote about Donald Trump was on August 9th, 2017 called “Is Donald Trump F-ing With Your Love Life?” 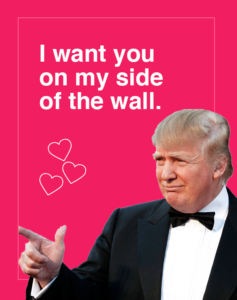 He did then, and he still is! Because Trump fucks with everything, including dating. He’s made it tribal. Thanks to Trump, love is now a battlefield, where people don’t cross enemy lines to date the opposition.

“Whether politics has made dating easier or harder is debatable, but one thing’s for sure: Donald Trump has become the new measure of compatibility. It’s not enough to know someone’s age, religion, career, interests, or relationship goals, you’ve got to know if they’re a Nasty Woman, a Bad Hombre, or a Deplorable.”

Four years later, it hasn’t gotten any better. The dating world is still as divided, if not more, which might not be such a bad thing. Because now we have the ability to swipe left on anti-maskers, COVID deniers or QAnon conspiracy kooks.

The truth is, you are your politics. Politics are your values and principles, you can’t separate them out. Pre-Trump, it wasn’t such a big deal, but love in the time of Trump is definitely a dealbreaker.

We all dated Donald Trump, and breaking up with him won’t be easy. We got in deep, and allowed him to penetrate all areas of our life. He says he’s never going away, and in fact, says we’re getting back together one day! He’s a man scorned, so he’ll continue to linger and be bitter. He’ll stalk and troll and tweet and make our lives miserable, just like a crazy ex. But now, we need to ghost him. We need to heal and move on, and get a restraining order if we have to.

It was a tough four years, but I have hope we can make politics civil, and make love great again. Just not with anyone named Trump.