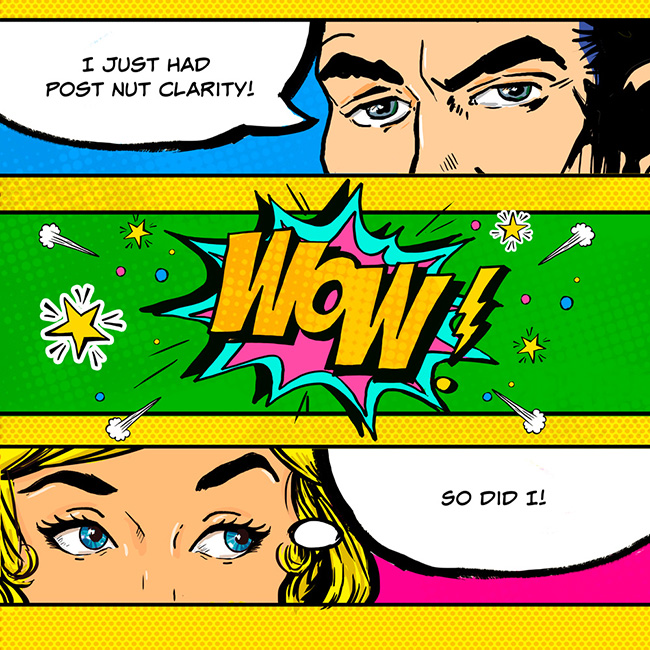 With the election a day away, it’s hard to think anyone’s still on the fence. But if your mind still isn’t made up, if you’re still confused about ballot measures, and struggling to pick presidents, and can’t seem to pull the lever, the solution may be to pull something else.

But then you rub one out, and suddenly, you have clarity! Or, as Trump likes to say: “It’s like a miracle, one day it just goes away.” What was attractive isn’t, what was desirable, is no longer. Justin Lehmiller, PhD, a social psychologist and research fellow at the Kinsey Institute, confirms this. “Once someone experiences orgasm, their thinking can become more clear.” Having post nut clarity will keep you from making the worst mistakes of your life in dating and politics.

Why does this happen? Blame brain chemistry. During sexual stimulation, there’s less blood in the brain than normal, which is replaced by endorphins, dopamine, and other feel-good hormones. After orgasm is achieved, the blood returns to the brain, making you feel like you can think more clearly. After you choke the chicken, you’ll suddenly realize that hot chick running for congress isn’t your type, and that proposition you’re about to vote for, is really a bunch of shit just benefitting billionaires. 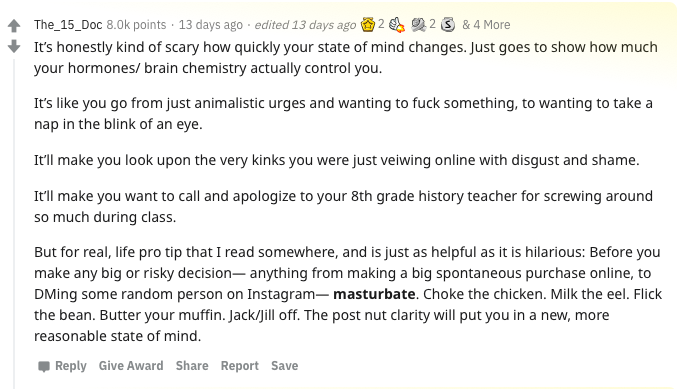 Post nut clarity isn’t just for men either, woman achieve amazing awareness from getting off. I remember years ago I was just starting to date a guy I was super attracted to. We hadn’t had sex yet, and the build-up was ridiculous. But then we did the deed, and right after I said to myself: What the hell was I thinking?

When I was in college, I had a sorority sister who ate dinner before going on dates, because she didn’t want to be hungry and eat too much. It’s like a guy who jerks off before a date so he can concentrate on the girl, and not getting into her pants. (P.S. My husband just informed me that guys jerk off before dates in case they get lucky and don’t want to come too soon. He then added, “Of course that doesn’t work either”)

People do dumb things when they’re horny/lonely/hungry or voting in a hotly contested elections. They think with their dicks (or vaginas), not with their heads. They let fear get the best of them. They believe lies. They become immune to cruelty. They let hate blind them. They ignore their own best-interests. They get bamboozled by tax cuts, and seduced by empty promises.

If the electorate of this country got laid before casting their votes, we might have better government.

Before you pull the lever, remember, you’re committing to at least a 4-year relationship with your president, and 6-years with your senators, plus a bunch of years with new judges, school board members, etc, so you don’t want to be rash. It’s just like picking a GF/BF or choosing your spouse, you want to be 100% all-in, for the right reasons. No regrets.