She was in her early 20s, just off the boat from Scotland; he was in his early 30s, newly transplanted from Brooklyn when they met and married in the 50’s.

Robby and I will be well into our 50s when we walk down the aisle for the first time.

They had a half a handful of relationships before tying the knot; Robby and I will have dated half the world before getting hitched.

They were young and inexperienced: she was an entry-level secretary at CBS; he was right out of the mailroom at William Morris; Robby and I are old pros with years of life experience under our belt.

They were just starting out, finding their way, not fully knowing themselves, or the ways of the world; Robby and I have been around the block, graduated from the school of hard knocks, and have the battle scars to show for it.

When they got married, they were building a life, planning for a family, and preparing for the future; Robby and I are already established and are looking forward to building on what we already have.

When my parents had sex, they made a baby; in about five minutes Robby and I will be sexy senior citizens.

When they moved in together, they had nothing, not even a pot to piss in; Robby and I already have our own sets of dishes, a blender, a hand mixer, a vacuum, AND a pot to piss in. We don’t really need anything, but we registered anyway because who couldn’t use a new pot?

They had goals and hopes and dreams for the future; so do we, but we’re also happy to be in the present.

The comparisons and differences are many, but there’s one thing we all proudly did together:

WE MARRIED FOR LOVE.

Not for money, not for power, not for status, not for a green card, or because of obligation or pressure. Not for any other reason, just love.

Like Frank Sinatra, we did it our way – on our terms, at our own pace, in our own time. And like Paul and Sonjia Brandon, we’re doing it with integrity.

Here’s how my mother describes starting out with my father:

“He was handsome, he was nice, he was a good person, and he appreciated my humor. We didn’t have much money, but we had love, and we got by. We had a small wedding at a little shul on Beverly Blvd., and had to borrow a car to go on our honeymoon since his car was in the shop. In those days, you didn’t wait to get married. It was the thing to do, and I’m glad we did because, well, we had you.”

Unfortunately, their marriage didn’t last, but knowing their story and hearing how they met has always been a source of inspiration for me. Robby’s and my path to the altar may look very different from my parents’ path, but in many ways, we’re following exactly in their footsteps. 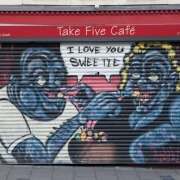 You're Not Truly Compatible Unless You Have This
April 18, 2014/ by Treva Brandon Scharf

And Now, A Word From The Late Blooming Groom
April 18, 2014/ by Treva Brandon Scharf 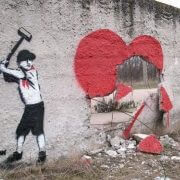 Admit It, You Suck At Relationships
2 replies

.
Eaton-Cox And The Great Hyphenate Debate

5 Ways To Know If Mr. Right Has The Right Stuff
Scroll to top