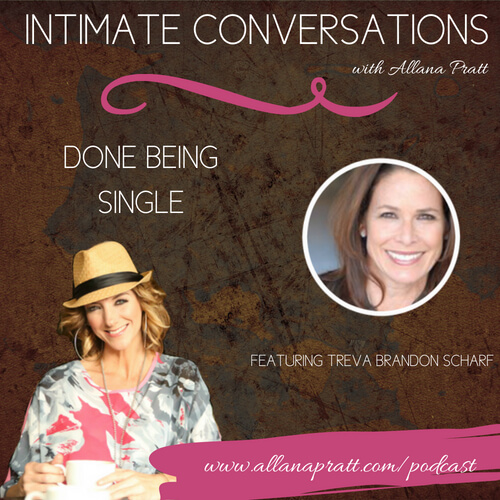 Wow, this woman GETS the process and has LIVED the process of what it takes to being DONE being single! She understands what we put into our inner growth is what we get out of the relationship we manifest. She gets that holding on with a death grip is the surest way to push love away. She gets that it’s NEVER too late for love and that the most important person to love is always ourselves.

I had the pleasure of being on their Podcast Done Being Single so having Treva on so vulnerably and prolifically was such a treat. She’s earned her wisdom, she earned her amazing man Robby… not ‘earned’ like worked her ass off… ‘earned’ like through courageous surrender, to letting go of needing marriage to be enough, by keeping to her own truth and standards of her heart, by basically marrying herSELF and then VOILA! Mr. Robby appeared! You will LOVE this inspiring conversation especially if you’re over 50 and single… this could be a game changer.

.
Singles Sex: When To Have It, When Not To Have It